On August first, several PATC-Charlottesville members traveled several hours to West Virginia to take an unusual hike.  They hiked along a stream that cut under a mountain for over a mile before exiting from under the other side of the mountain.
The Sinks of Gandy is known as West Virginia's most popular "wild cave," meaning one that is not a tour-driven tourist cave.  It is located a few miles west of Spruce Knob, the highest point in West Virginia.  Although surrounded by lands encompassing the Monongahela National Forest, the cave itself is on private land.  That land is for sale, so the hike leader wanted to get back out there in case it sold and the new owners refused access.  Fortunately, the land is not cheap, so it has been on the market for several months as of this writing. 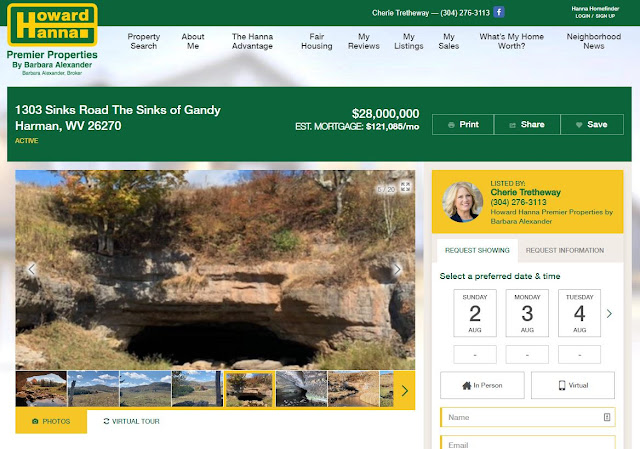 The cave itself is flat - no ropes needed - and high.  There were only a couple of spots requiring hikers to duck their heads.  It was like walking through a stream bed in the dark.
Several in the group had hiked much of this cave before, but could not complete it because they could not find how to proceed after hiking deep into the cave.  This time, they started from the downstream end and headed back to the main entrance, figuring that might provide the answer.  But after exploring several side rooms, the group did not find a connection to the rest of the cave.  So they exited and went back around to the main entrance. 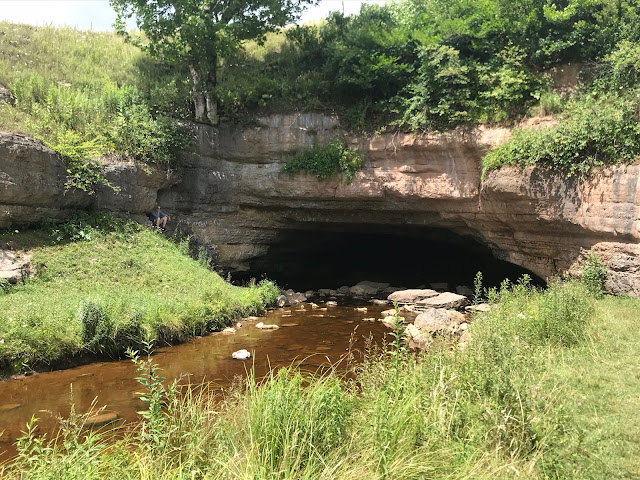 Most of the group made it back to the spot where some had turned around a couple of years previously, still without an answer about how to connect to the downstream end.  Unfortunately, the answer did not come until after we all exited, in the form of a New York-based doctor we met at the parking lot who claimed to have grown up in the area and hiked the cave annually since age 10.   He described the connection and where we had gone wrong.  He said many people get stuck at that same spot. We were too spent to go back in and try again to see if his description was correct.  Maybe someday. 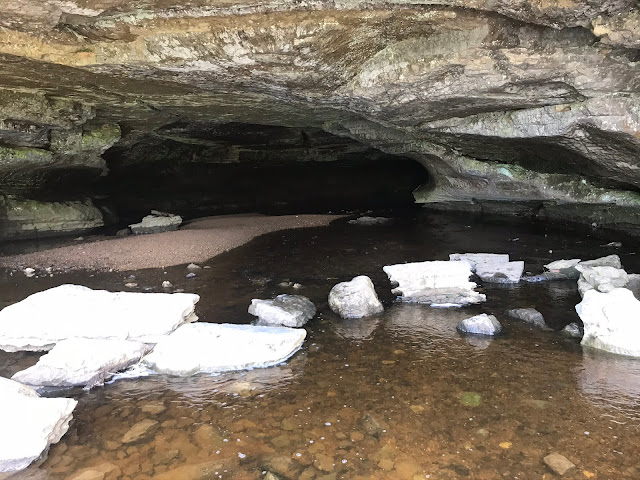 The cave actually made it very easy to be socially distant from other hikers. 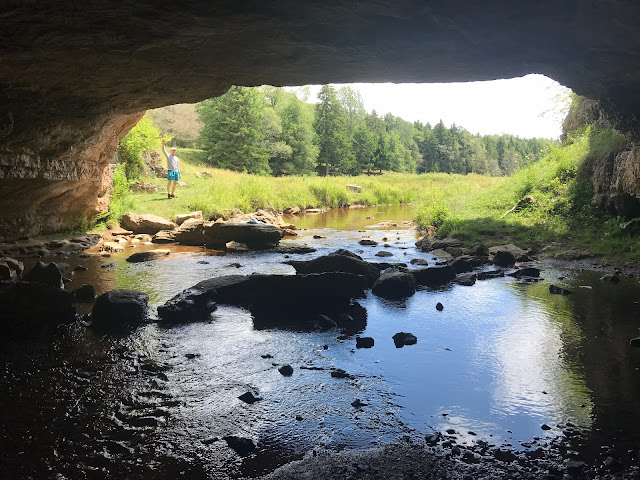 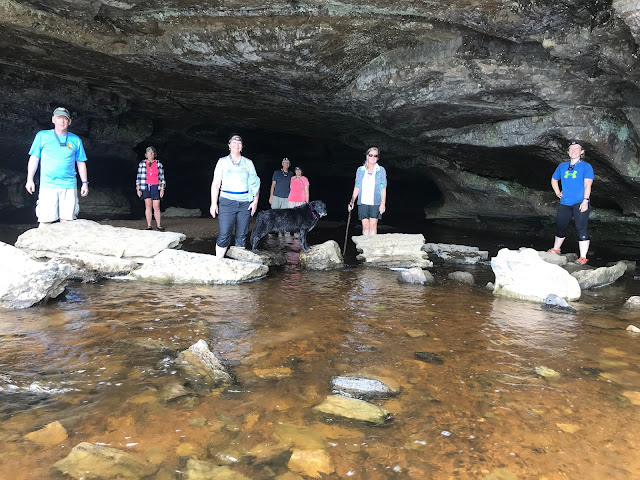 With the Charlottesville area in a long running heat wave, hike leader Jeff Monroe invited some PATC members who had expressed previous interest in hiking for a relatively last minute hike on the North River Gorge Trail.  Karen and John Ballen accepted the challenge. 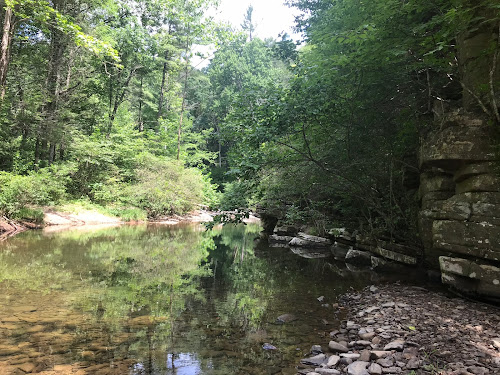 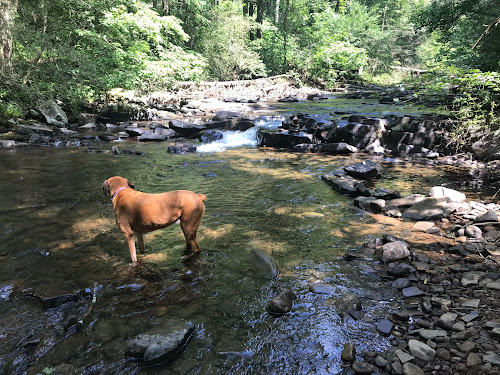 The North River Gorge Trail is located in the GWNF North River District west of Churchville.  It has virtually no elevation gain over most of its length, except right at the end when hikers returned to their vehicles.  There were at least a dozen North River crossings, so everyone's feet got wet. The hike leader made the hike in Crocs, which worked great.
Most of the trail is an old woods road, so the trail generally was very wide and not subject to summer growth.  The river water felt great and the river itself provided social distancing over lunch, with a hiker and a dog on one side and married hikers on the other.
North River Gorge is an ideal summer hike: relatively cool, little elevation gain, little summer overgrowth, without a lot of other hikers over most of its distance.
Hike Distance: 9.6 miles
Total Ascent: 600 feet
Total Time: 4:05 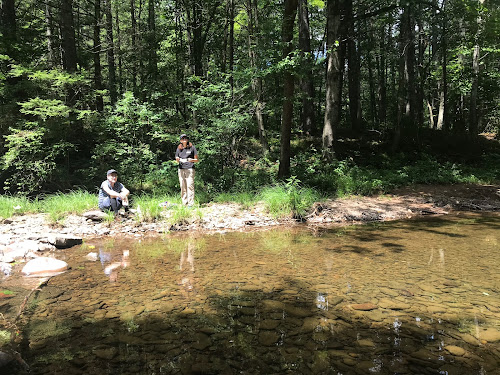 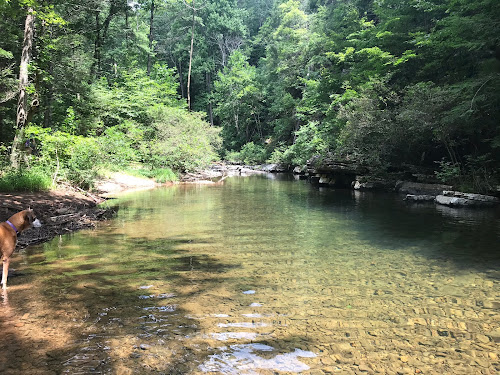 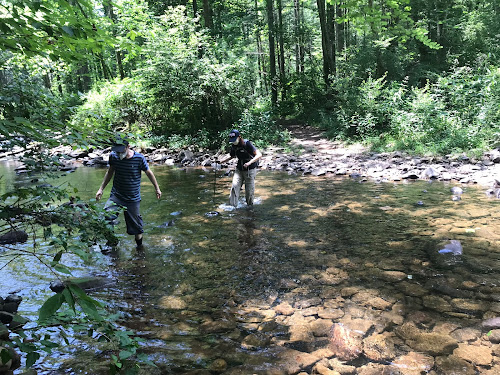 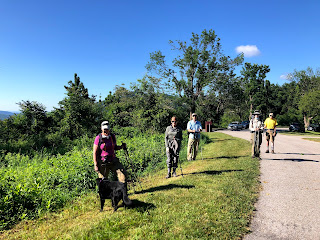 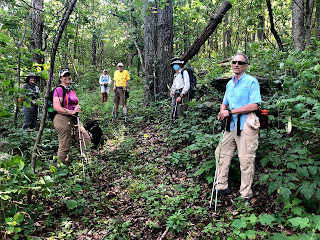 Saturday, July 11 seven PATC members gathered at Three Ridges Overlook for an investigative hike.  Tom Johnson, SSVC member and former PATC president, ventured down from Front Royal.  He was interested in seeing the old abandoned Appalachian Trail that ran from Three Ridges Overlook on the Blue Ridge Parkway, through the woods (NPS and ATC borders), up into Wintergreen Resort, and finally ending at Dripping Rock where it connects to the relocated Appalachian Trail. Tom has written a book on the history of the Appalachian Trail, which will soon be published and had a desire to hike this section that he had researched, but never seen. Marit Anderson, hike leader, gathered a group of his old friends, including Iva Gillet, Bill Holman, John Shannon, and Marian Styles, and organized the day.  Mark Perschel, hike leader, assisted the hike and also spent many hours the day before clipping tall vegetation in the woods leading up to Wintergreen from Three Ridges Overlook...creating a walkable trail and also marking GPS points where the four visible white blazes can still be seen on the trees. As history goes, Wintergreen was a planned resort community, which lay astride the route of the AT. The developer, Lewis Payne, began to develop the property in 1976. He was not unfriendly to the trail, but the trail would run along streets and houses, which would not be the ideal trail envisioned in the National Trails System Act.  He agreed to sell the land to the ATC and the funds were acquired with NPS funds and Congressional Appropriations. The reroute was moved to the west and included a nice view at Cedar Cliffs Overlook.
We had a beautiful day, fairly cool for July, very breezy with clear skies.  As we hiked, Tom would interject historical facts of the AT and its creation over the years.  We took our time, the trails are rocky and steep in most of that area through Wintergreen, stopping for lunch at an overlook facing west with views of Sherando Lake, and ended at Dripping Rock with a safe-distance shuttle (one passenger at a time) set up at the end of the hike to retrieve the cars.  The only sad part of the day was that Jeff Monroe could not join us as planned. Make sure to check out Tom Johnson's book, From Dream to Reality-the History of the Appalachian Trail when it is published and will be sold through the Appalachian Trails Conservancy. 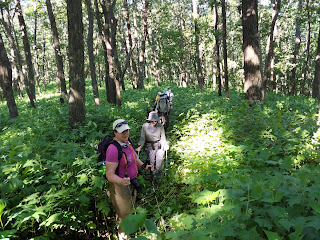 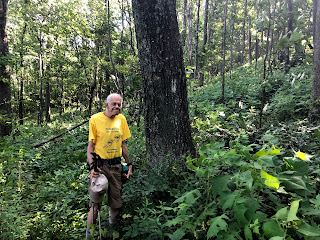 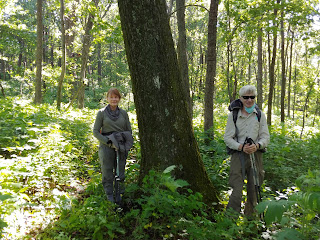 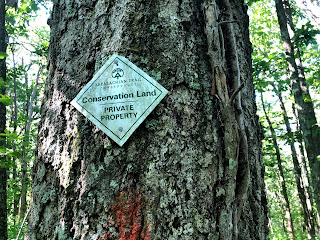 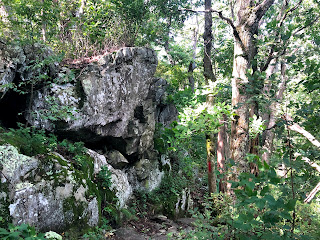 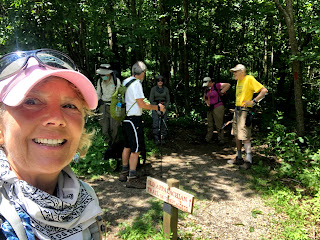 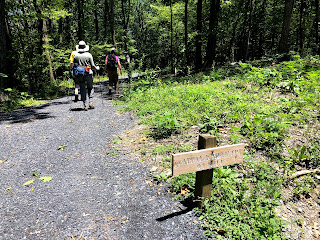 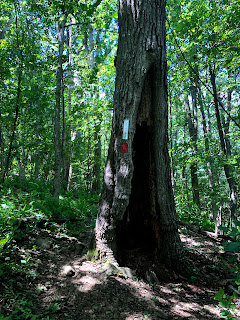 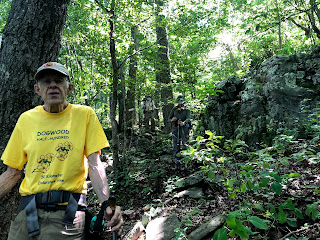 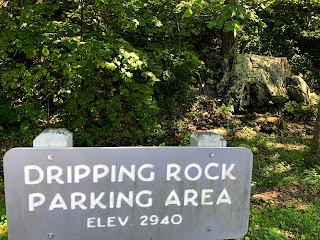 
A small group of four hikers from the PATC Charlottesville Chapter took a last minute Independence Day hike in the heat and the crowds to Cole Mountain from Salt Log Gap on the AT.  10.9 miles total, over 5 hours, 15 minutes.  Lots of young people without masks hiking together on the Cole Mountain portion - we gave them plenty of space!

The Charlottesville Chapter of the PATC resumed its recreational hike program on Saturday, June 27th with a members-only hike starting at Braley Pond in West Augusta, VA and climbing up the Bald Ridge Trail to a viewpoint near The Peak.  The group returned the same way (though they returned on the trail on the opposite side of Braley Pond) for a hike totaling 8.6 miles.  Attendees included Peggy Byrd, Nancy Handley, three members of the Ballen Family, John Brandt, hike leader Jeff Monroe, and his dog Gracie.

Reaction from one of our hikers:  I enjoyed my fellow hikers, the beauty of the trail, especially the fragrance of the wild roses, the view, the weather was amazingly comfortable, the light breeze was delightful.  I am a fan of wind.  It was also a treat to socialize with a group of people, my first since the middle of March. Thanks for planning and leading this hike. Looking forward to another one. 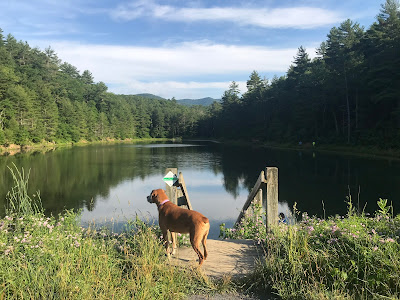 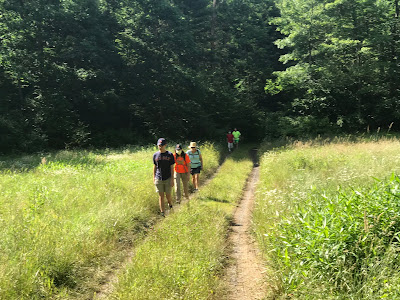 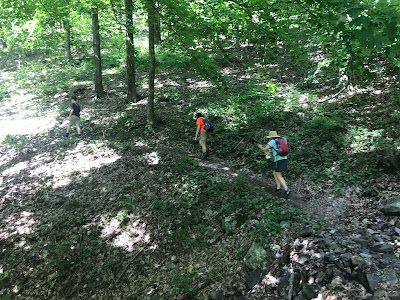 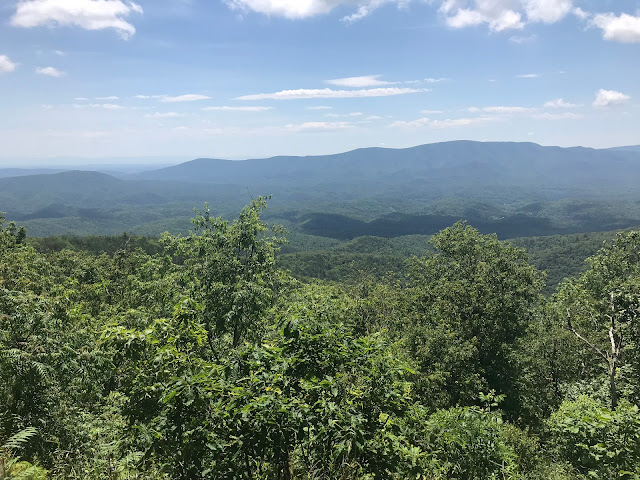 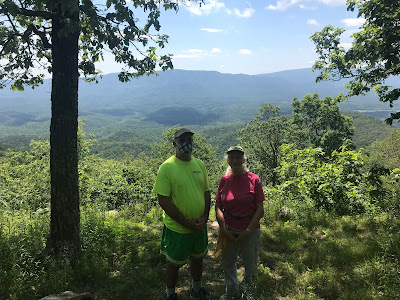 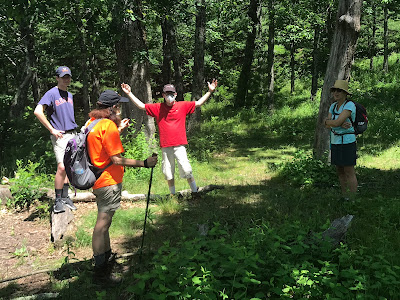 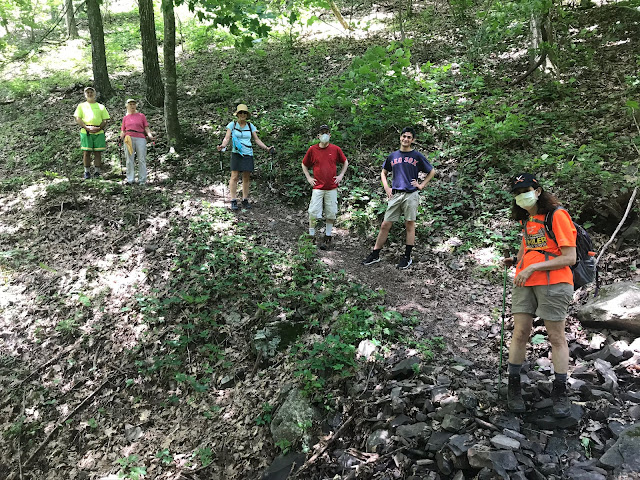