On a damp morning when other chapter members were wading streams, I went to McCormick Gap to do some overdue maintenance on drainage of the steep uphill section of the chapter’s AT section. In some spots, changing the slope of the trail caused water to run off the trail and take debris with it. However, other structures to divert water were full of soil.
The recent rain made it easier to see where drainage was not working well, and I cleared out all the clogged drains. The wet soil made tamping down of earth difficult because it stuck to the McLeod
As expected, I saw major growth of oriental lady’s thumb (a little removed). During the day, four backpackers went through on their way to Georgia to complete a north-to-south AT through hike.

In August 1986, Rita Wyatt-Beard sent letters to PATC members in the area inviting them to a meeting to consider forming a chapter of PATC in Charlottesville. Instead of sitting alone in the Thomas Jefferson Unitarian Church as she feared, 20 or more people came and showed that a chapter was viable. Howard Parsons, who later served as vice-president of the chapter, offered to lead a hike over Trayfoot Mountain. Thus, in September 1986, a group assembled at Blackrock Gap parking area for the chapter’s first hike.

To commemorate the event, John Shannon, who was at the founding meeting and on the first hike, lead today’s hike retracing the path of 30 years earlier. Access to the trails from the valley is now better, making it the preferred starting point, but today our goal was remembering our roots, not taking it easy. Pete Fink, Brad Young, and Michael Seth participated.
Clouds kept the temperature a little lower than expected, which helped us move steadily. At the junction of Trayfoot and Furnace Mountain Trails, we met a couple of hikers who were unclear which way they should go; John suggested that he might have been familiar with the trails at this spot before the hikers were born.
We did not attempt to reach the summit of Trayfoot Mountain, which is scarcely any higher than the trail, because regrowth made it difficult to reach, and views would have been nonexistent. The trail was much the same as it has been for the previous 30 years, except that exotic invasive plants have reached this remote area.
One moment of excitement came when Brad noted that John had just walked past a black snake, which moved away before we could take a picture. We continued to an overlook of Buzzard Rock for lunch, then completed our descent of Trayfoot Mountain. Our first crossing of Paine Run was dry, but did see water at the second crossing.
A week later there was a little more history when two members from over 20 years ago came to Charlottesville for a reunion hike.

May the Charlottesville Chapter – PATC continue for another 30 wonderful years! 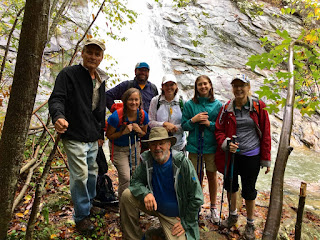 Eight hikers including hike leader, Gabriel Garretson were brave enough to explore the total length of the Moormans River in flood condition after 10 inches of rain. We started on the SNP at Blackrock Gap and finished at Jarman Gap. Initially we had seven hikers including, Gabriel, Claire Cline, Patricia Wright, Tony Lagana, Stephanie Weaver, Aislinn Lagana and John Sinclair. We pickup up another hiker midway, John Brandt, who managed to ride his bike and trail run to catch up with the group after we had a considerable head start.  The overall hike was 11 miles with 15oo feet of ascent and 32 total stream crossings (counting side streams with an opportunity to get wet). Everyone got their shoes wet as we had to “ford” the Moormans River about 12 times with water level about 2 feet higher than normal. Rock hopping was impossible. Tony Lagana provided expert instruction on crossing methods for deep white water streams that helped most hikers. Only one person slipped on the most difficult stream crossing and she was promptly rescued without injury. This was a challenging hike but one of the most beautiful water hikes I have ever attempted. Everyone got back safely and the memories of the adventure will linger for many years to come. We got a chance for swimming in the blue hole and assisted a hawk in need of immediate medical attention. Despite the flood conditions, everyone enjoyed the hike and are looking forward to a repeat hike later this year.  Claire Cline, as usual, did an excellent job as our hike photographer. 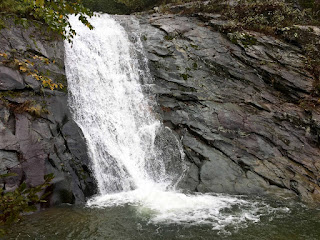 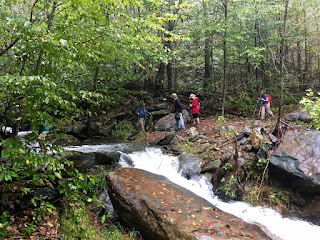 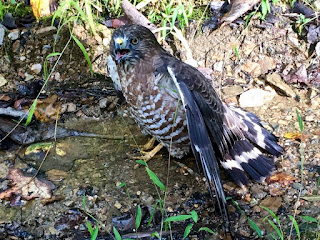 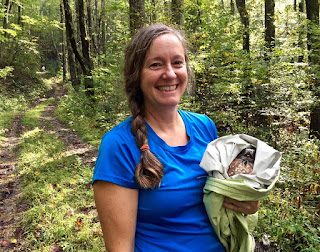 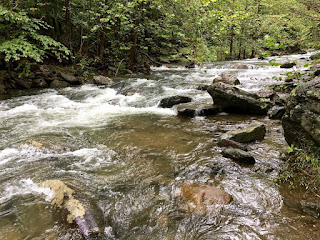 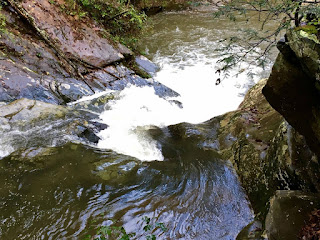 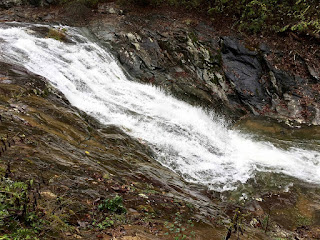 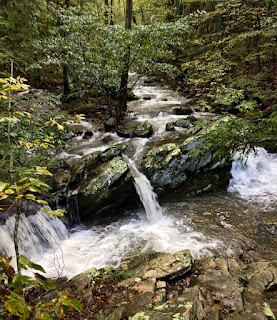