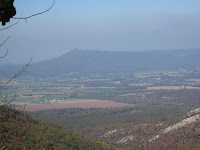 Anyone missing Saturday's hike to Lewis Peak missed the finest day in Shenandoah National Park in a while.  The leaves were near peak and the temperatures were perfect on a cool and sunny day.  Apparently this was obvious to many people as all the parking lots and overlooks were experiencing overflow conditions.


Nine hikers left Albemarle High School headed for Rockfish Gap on I-64.   At times we appeared to be in a "Turkey Caravan" but later realized that we were intermingled with Hokie fans headed to Blacksburg for the VT game.  We squeezed into the grass at Browns Gap parking since there were no spots left. 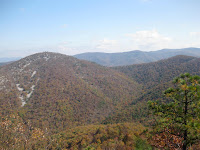 We headed up the AT and turned on to the Rockytop Trail leaving the crowds behind.  We made the gradual climb to the junction with the Lewis Peak trail.  Maynard and Leon stopped there so Bailey could rest and Maynard needed to turn back early to make an appointment.  The rest of the group followed Lindsay on to the summit. 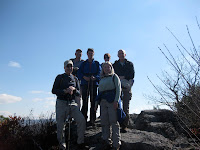 Don, Dan, Rita, Marian, Dave, and Sue all enjoyed the views from Lewis Peak toward Massanutten and northward toward Rockytop.  After a lunch break we headed back down and picked up Leon and Bailey for the return to the parking lot.  A great day to be out hiking!
Posted by Ken M at 10/25/2011 08:37:00 PM No comments: Links to this post

Lindsay Brown met hikers amongst the chaos in the parking lot on a weekend of tests and band practice. The group persevered through the meet-up confusion and headed to the trailhead at Wildcat Ridge where hike leader Iva Gillet met the group, after a pre-hike 2 mile jaunt on the AT from Turk Gap with fellow hikers Maritza and Jack Hartnett, and Dan Ralston.  While car shuttles were run, John Brandt appeared in his customary manner, ready to hike in shorts, despite the relatively cool temperatures. Also joining us this day were Joanne and Maynard Davis recently arriving from . And as it is a small world, Lindsay and Maynard knew each other from their former lives 35 years ago! 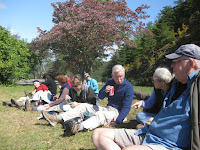 Dan Ralston zipped off in front with Jack, Maritza, and Tom Schultz, leading the charge along the AT. We proceeded north to hike a less travelled section of the AT, though we passed several backpackers out for the lovely fall weekend. The leaves were just beginning to turn, and the beauty of our mountains in the fall cannot be surpassed. Wanda Hamlin brought out her usual pleasant smile and good conversation as we hiked today.
After rolling along the AT for several miles, we decided to break for lunch at the overlook which required a short walk along the .  We spread out on the grass at the overlook to soak up the expansive view that was the gift this day. All was well until a park ranger pulled over and approached the group. Acting in his usual presidential capacity, Lindsay Brown pointed out the hike leader as at fault for whatever the infraction was. However, the friendly ranger was only glad to see others enjoying the Park and the view, and he chatted for a while before moving on.  I thought he was there to give John a warning about being shirtless, but such was not the case. No charges have been issued this time. 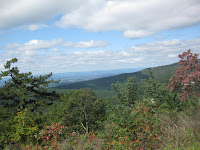 Soaking in the sun’s rays at lunch, Jeanne Bono and Dennis Templeton chatted with Bev and Pete Fink, making me realize we had 4 married couples on our hike this day. What an excellent way to spend a day with your spouse! More folks should try it! We packed up our repast and returned to the AT to finish the last 2 miles to Blackrock Gap. As this section of the trail is not part of any loop trails, it is rarely hiked except by AT hikers. With a few more ascents and descents, we arrived at Blackrock in plenty of time for the hike leader to jet off to the U.Va. football game. Jack kindly gave a ride to Pete, Bev, and John so that they could add a few more miles to the short hike this day, as they hiked back to the car from the other direction. Lovely fall weather as the leaves were starting to turn was a highlight, as well as a good time experiencing it with former and new friends.
By Iva Gillet
Posted by Ken M at 10/13/2011 07:50:00 PM No comments: Links to this post