On National Public Lands Day, Shenandoah National Park carries out projects to improve specific areas of the park. One of those projects, which the chapter participated in last year and this year, was clearing black locust at Big Meadows in order to have an open grassland area.

This year, at the northern end of the open area, volunteers cut locust with loppers and small saws. Afterwards, a Park Service biological control technician sprayed the stumps with herbicide to prevent regrowth.

A couple of people from previous clearing projects were glad to see the Charlottesville touch of lemon raspberry cake. The Park Service offered volunteers small gifts in appreciation of their efforts.
Posted by PATC - Charlottesville Chapter at 9/30/2013 09:28:00 PM No comments: Links to this post


Reported by John Shannon
A couple of previous trips found some trees down on the northern part of the Chapter’s section of Appalachian Trail between Rockfish and McCormick Gaps. Today, John Herrity came to help remove the fallen trees; while with the Carolina Mountain Club, he participated in numerous trail worktrips, although today’s reliance on hand saws was different from what he was used to.

We drove through fog to McCormick Gap, where John H. thought that the initial breath-taking climb might have been an initiation rite. After some easier walking, we came to the first downed tree. This tree fell in a storm early this year but did not fall to the ground until last week. At two of the trees, we made the two needed cuts at the same time but took turns making one large cut on another log. At the last log, John H used a fork in the tree as a lever to push it off the trail, which was possible because of a cut made earlier this year.

We declared lunch because my memory said that we had cleared all fallen trees; yes, my GPS had a record, but I did not find it earlier in the day. While eating, we looked up to see John Brandt emerge out of the fog, disappointed to find that his bowsaw was not needed. With the primary mission of the day accomplished, and the mist turning to light rain, we proceeded to the entrance station where John B took me to get my car from McCormick Gap. As expected, we encountered some delays returning to Albemarle High caused by football traffic but still returned earlier than expected.
Posted by PATC - Charlottesville Chapter at 9/26/2013 08:27:00 PM No comments: Links to this post

On successive weekends, I went to preserve, or even extend, previous efforts to slow invasive plants at Rockfish and McCormick Gaps.

The main targets were Oriental lady’s thumb, bittersweet, and ailanthus. I found regrowth, of course. The good news is that the regrowth of lady’s thumb at the trailhead at McCormick Gap was less, and some areas have less bittersweet than previously, so the efforts of the past are having an effect. However, beyond the previously cleared area, lady’s thumb grew prolifically, and was flowering, so that cutting might spread if further. There were also some ailanthus sprouting in an area where there are no known mature ailanthus trees. There were several blowdowns lying on the ground, which are not significant obstacles, but need to go.
Posted by PATC - Charlottesville Chapter at 9/17/2013 07:38:00 AM No comments: Links to this post

With summer still effective, and it being a holiday, a water hike without lots of climbing seemed appropriate, so off to Nicholson Hollow. Seven of us left and met Kelly Gueli and Mike Brown at the crowded Old Rag parking lot.

Early on, it felt hot and humid, but further up the trail, that feeling disappeared. Despite recent rain, the river was not high and thus easily crossed. After the last crossing, we were near a large swimming hole, where we found a large, quiet timber rattler which slowly moved. Perhaps that was why there was no interest in swimming, so we pushed on, even those who initially wanted to hike only 5 miles.

At Corbin Cabin, we ate lunch in the river, and were greeted by Blue-Blazed Central District Manager Patrick Wilson who was running along some trails for a quick inspection. He recognized some of us from the Little Calf relocation project. 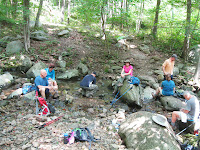 After lunch, Kelly and Mike chose to follow the trail to its end on . Dan Ralston,who was
recording the trail to ensure that the PATC map is up to date, stayed with the main group rather than seeing the whole trail.

On our way out, we paused at one of our classic swim holes, but the group decided to keep going and found a couple of pools where fish tried to eat CJ Woodburn’s feet.

The parking lot was still crowded on our return, leading us to wonder about the many people presumably on 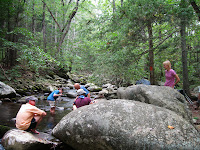 One carload stopped in Etlan for ice cream before heading into a very heavy rainstorm, which slowed us down. In our concern to get back in time to avoid football traffic, we did not know that the football game was delayed by the storm. We wondered whether the many people on Old Rag also experienced the lightning and heavy rain we did.

Others hiking today were Lindsay Brown, Bev and Pete Fink, and Kelly O’Rourke.

This was a joint hike between the PATC - Charlottesville Chapter and the PATC - Southern Shenandoah Valley Chapter. The hike was dedicated to Iva and the memory of her father, who passed away this week. 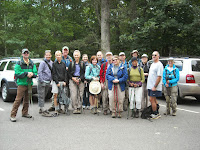 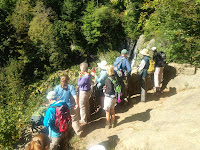 We had 17 people show up on this beautiful Fall day to hike: Dan Ralston (hike leader), Karen Waterman (co-hike leader, SSVC), David Carter, Emerald Young, Brad Young, Ken Moss, Marian Styles, Kelly O’Rouke, Christine Ballard, CJ Woodburn, John Brandt, Mike Waterman, Michael Grogh, Roxann Atwood, Wanda Hamlin and Bryan Burns.  We also had a guest from DC join us, Laura Kasper, who is a psychologist moving to the Charlottesville area.  She did a Google search for a hiking group, found us and showed up for the hike. 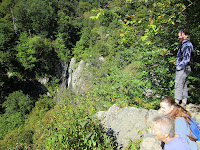 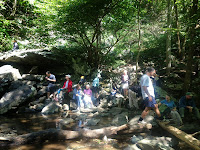 The weather was perfect although it started off a little cloudy.  The sun soon broke through the clouds and the day turned out to be gorgeous.  At the bottom of the loop trail lies the South River Falls and today it did not disappoint us; twin falls flowed to the basin below, where we spent an hour having lunch at the base of the beautiful falls.  We were joined by a young Northern Water snake but he kept his distance sunning himself on a rock.

Kelly, Marian and John decided to add a few miles to the hike and took a side hike on the Pocosin Trail to pass by the ruins on the return hike.

A perfect hike on a perfect Fall-like day.  It could not have been a better hike. 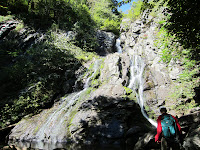 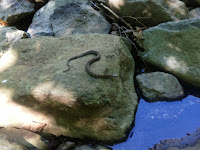 Eleven hikers enjoyed a beautiful September day including Rita Kieffer, Emerald Young, Katherine Maus, Brad Young, Kelly O'Rourke, CJ Woodburn, Dan Ralston, Dave Borszich, John Brandt, Mark Perschel, and hike leader, Marit Gay.
We began the approximately 8 mile hike at Slacks Overlook on the Blue Ridge Parkway, milepost 20, taking the Slacks Trail to the Torry Ridge Trail.  This was a nice ridge line descent toward Sherando Lake following into a short section of the Blue Loop Trail.  Fortunately co-leader, Mark Perschel, was able to steer us the correct way and then join the steep Dam Trail to reach the Lakeside Trail to make our way along the lake to the beach and picnic area.  Sherando Lake Recreation Area is in the Pedlar Ranger District of the George Washington National Forest and has been a local favorite for generations since 1936 providing swimming, hiking, and camping. The 25 acre spring-fed lake enticed John, Brad, CJ, and Marit to take a dip during lunch.

Others sought shade in the beautiful, native stone and timber blend shelter built by the Civilian Conservation Corps to partake their meal.

At 1 pm we divided into two groups to allow those needing to return sooner to resume their climb back up the mountain via the Blue Loop Trail back up to Torry Ridge Trail ending back at the Slacks Overlook. An added feature to the day was an invitation to take a trek to Waynesboro to hear PATC member, Barbara Martin, sing with the Liz Barnes Trio at The Gateway venue.  CJ, Mark, and Marit were treated to a delightful evening of blues and jazz.  Overall a wonderful day in the Blue Ridge Mountains and Shenandoah Valley! 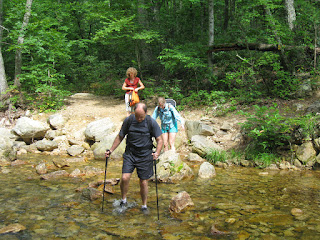 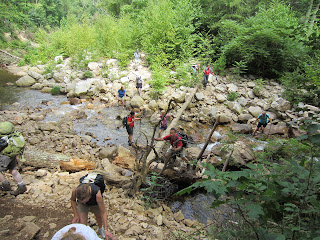 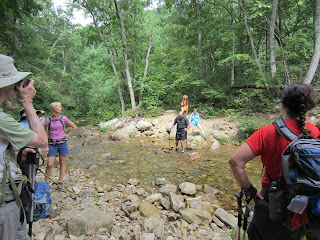 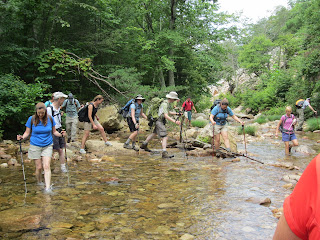 And after this crossing: 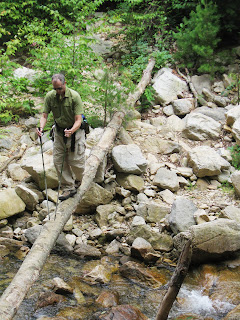 We arrived at the Falls: 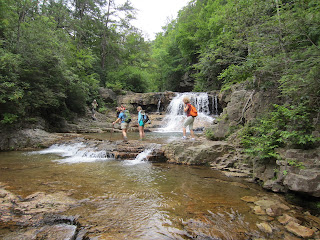 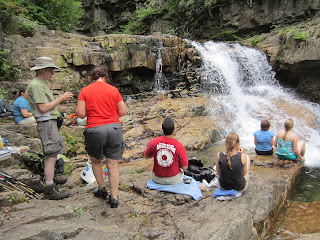 We had 3 tough guys who endured the chilly water temperature while the rest of us ate lunch: 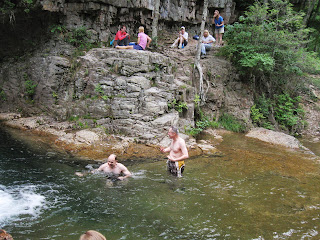 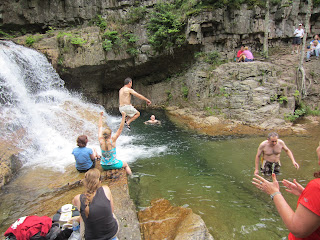 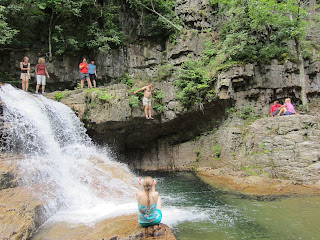 On the way back we crossed the river: 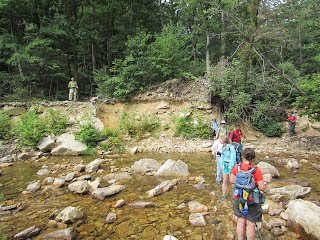 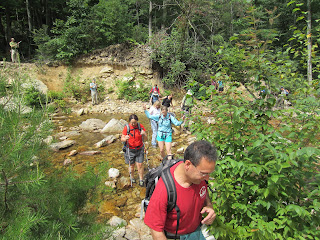