reported by Iva Gillet
After moving this hike up one day in advance of the 100% rain forecast for Saturday, eleven intrepid hikers met at Swift Run Gap entrance station the day after Thanksgiving for the planned short hike up Hawksbill for sunset and full moon rise. However, upon arrival Park personnel announced a 6 PM closing of the Central section, with the South section closed already for more than a week following the ice storm. Based on having to park at the entrance, we decided to hike the AT north to the South River overlook, where we hoped to see the moonrise. The brave souls who joined for the adventure were: Paul Henderson, Sunny Choi, Marian Styles, Geoff Manning-Smith, Brain Muszynski, CJ Woodburn, David Crowe, Nancy Handley, Mark Perschel, and his visiting thru biker, Susannah Brumer. She was derailed from her cross country bike ride when the recent ice storm closed the Blue Ridge Parkway.
We hiked the AT north for 3 ½ miles, clearing downed tree limbs as we went. Many folks had never hiked this section and other than a few downed limbs, it was in great shape.  We assembled at the South River Falls overlook with Brian serving hot chocolate and chai tea, Sunny sharing her hot water, and the hike leader sharing several chocolate treats including milk and dark chocolate buckeyes from Yoder’s. We enjoyed our dinner and snacks all the while waiting for the moon rise as clouds had formed. After about ½ hour in the 27 degree temperature, we retreated, this time returning in the dark along the closed Skyline Drive. It was lovely and we could see the lights of the houses toward Elkton below us. For the 3rd year in a row, I led a moonrise hike with no moon, but we enjoyed stories of Thanksgiving meals and hiking with our friends. NEXT time, Full Moon! 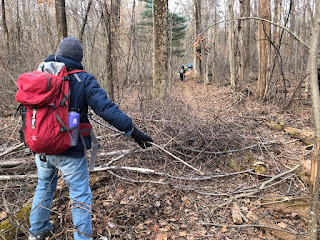 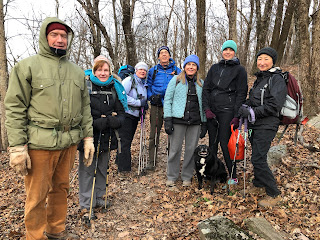 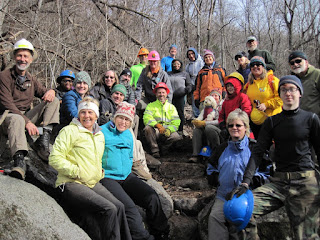 Members of the Charlottesville PATC joined forces with the mighty Cadillac Crew on three trail building weekends this fall - September 22/23, November 10/11, and December 8/9  It is always amazing to work with this crew because they are so knowledgeable, hard working, and fun.  Most of the Cadillac Crew live in the D.C. area, but many volunteers came from other places to be a part of the trail building experience.  Many are hikers and want to give back....building trails for future hikers, so thank you to the Cadillac Crew for putting us to good work! Volunteers from Charlottesville PATC included Bill Holman who spearheaded the project since he is District Manager of Mutton Hollow, Mark Walkup (trail builder extraordinaire), Paul Henderson, Amy and Evan Reed, Mark Perschel, and Marit Anderson.  The project was begun last spring with first laying down flags for the route and continued this fall with building the trail from the ground up.  It is demanding work clearing the ground cover, leveling the earth, sloping for drainage, clearing rocks, creating rock stairways, and more.  Much of the trail has been made and future projects in the spring will hopefully complete the new Mutton Hollow Trail Loop, which will make a nice hiking path for those staying at the PATC Vining Cabin or nearby Vining Tract area.  Many thanks to all the Cadillac Crew, especially Robert Fina, Martha Becton, and Kirsten Elowsky who led the team.  Steve Barber and family nearby opened up their beautiful home and grounds for the Cadillac Crew and volunteers to stay for the weekends, which was also much appreciated. We look forward to continued progress on this trail - come join the crew in the spring. 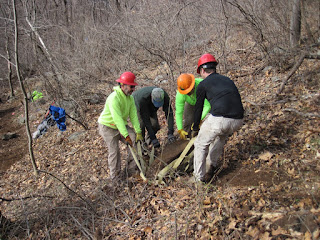 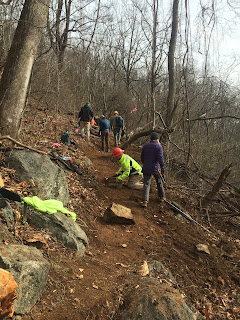 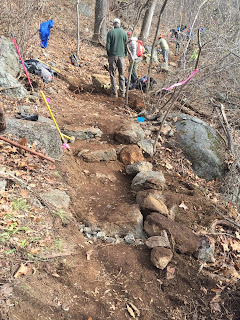 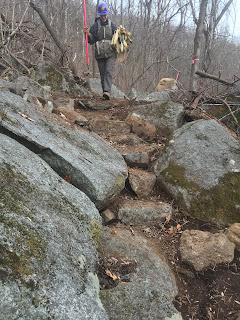 submitted by Marit Anderson; photos by Marit and Kirsten Elowsky