Eleven eager hikers met May 21 on a beautiful morning to hike the Jones Run – Doyles River loop.  Ken Moss and Marit Gay led the hike and were not sure if the intended circuit hike would be attempted due to high water because of recent rains.  Marit had pre-hiked it earlier in the week and was basically walking in rivers of water on the trail.  Fortunately the levels had subsided and the decision was made to do the circuit hike.
We began at Jones Run parking lot and enjoyed a wonderful downward hike along the raging Jones Run which includes three major waterfalls.  Dan Ralston crossed the stream where Marit had done so earlier in the week and was separated from the group for the remainder of the hike, making his own adventure for the day.  Dan is an experienced hiker though, so he used his map and GPS to find his way back to the parking lot at the end of his route.
Meanwhile the group was admiring the beautiful flora and waterfalls. We had some excitement at the point where we forded the river.  Some chose to walk through and others donned their sandals and crocs to cross.  Ken and Lindsay Brown shared a pair of Crocs and treking poles to get across. Refreshing! 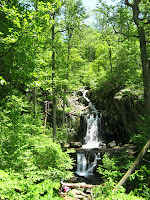 Once we intersected the Doyles River Trail we split up for a while to try and determine where Dan might be.  Ken and Lindsay stayed at the intersection and the others went on to the lower falls to enjoy a rest and lunch.  We were lulled by the cascading water until the others rejoined us.  From here we continued on the Doyle River Trail.  We met many other hikers now, as this is a very popular trail.  Many pools of water invited us to swim, but we held off knowing the spring water temperatures would be a little too frigid yet.
Eventually we met the Browns Gap Fire Road.  Lindsay Brown branched off with Dave Borszich and Leon Gorman (with Bailey) to scout for our missing hiker and the rest continued on to the Doyles River Trail.  The view at the Doyles River Overlook was spectacular.  We also took a detour to see the Doyles River Cabin.  Finally we met the AT and headed south on the trail to make our way back to the Jones Run Parking lot.  We were reunited with the others including our missing member.  Phew!  Other hikers included Pete Fink, Bev Moresca, Liz Lyons, Nancy Hall and Barbara Shenefield. All in all, it was another exciting and wonderful day in Shenandoah National Park! 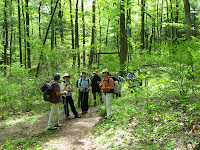 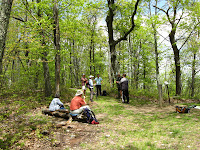 The weather on Saturday was made for a hike and Shenandoah National Park was full of hikers, bikers, and people on Skyline Drive enjoying spring.  Our group of 14 hikers headed to the Big Run Loop Trail.  We started at Doyle's River Parking Lot for the 7 mile outing.  Dan Ralston and Eric Clepper volunteered to handle the sweep responsibilities as we headed down from Skyline Drive toward Big Run.   One stream crossing proved a minor challenge for some but Brad Young managed to throw a few more boulders in the stream to help out with the rock hop crossing. 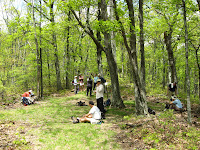 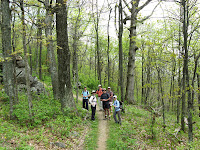 This also provided an impromptu shower for a few hikers waiting to cross, including Helen Reutlinger.  After climbing along a ridge we found a trail junction perfect for a lunch stop.  Soon after the group finished off the chocolate provided by Hike Leader, Lindsay Brown, we were on our way again, heading toward the AT and the return to the parking area.  Other hikers included Sue Tansey, Neil McKinney, Barbara Wilson, Dan Funkhousen, Liz Lyons, Don Davis, Andy Wilgruber, Ken Moss, and Ed Yu.
Posted by PATC - Charlottesville Chapter at 5/09/2011 08:47:00 PM No comments: Links to this post 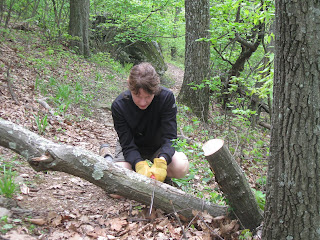 After a report of some trees down on the Chapter’s section of Appalachian Trail, and realizing spring rain had fallen, and plants were growing again, I decided it was time to visit the chapter’s section of the AT again. With Marian Styles, I headed to Rockfish Gap where I cleaned out waterbars and other drainage structures which had accumulated a lot of leaf material over winter. As usual, I did a little reshaping as well. On one steep downhill section there was some visible erosion, but not as bad as seen on a trip elsewhere two weeks earlier. I did some more trail regrading to reduce future erosion. Marian removed some vegetation that should not be in the trail corridor. Finally the waterbars were finished, so we headed south. First stop was an area where we have reduced the amount of bittersweet over the last few years, but as expected, roots keep sprouting, and there was a patch I probably missed last year. By now it was time for lunch. With just two of us, a small chocolate raspberry cake was plenty, and there were left overs. We left bittersweet looking for blowdowns reported earlier, and through hikers confirmed there were some trees down. The first did not match the report I had, but the next did; Marian did most of the cutting. Then a large log we saw in the snow earlier in the year. I removed one branch, but the trunk was too large for my saw. However, people can easily walk around it, especially after I removed a pointed piece sticking out. Then the question was if there was another tree down. By now, all the north bound backpackers had passed so we could not ask anyone if there were more trees down, but then we found the second reported tree. It was relatively small. We also stopped at a spring which in the past was overgrown with multiflora rose, which the chapter has largely cut back, so that now we can go a little further back to see major bittersweet growth. Today we neutralized and suppressed some large vines, so that next time it will be easier to see more and hopefully a couple of tree will survive. During the final descent to McCormick Gap, we removed the garlic mustard in flower; there is more, but perhaps we selected against the early bloomers, leaving the weaker plants.

During the day, several through hikers walked by, and all who stopped to speak to us thanked us for our work. 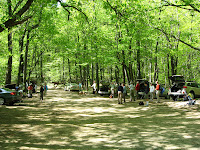 With  impeccable spring weather on relatively unchartered trails, we had an unprecedented group of 31! While some folks had not hiked with us for year, we all had a lovely hike to catch up on past activities. We were also fortunate to have all of outr hike leaders out, except for Michael Seth, which has not happened in some time, and was especially helpful with such a large group. 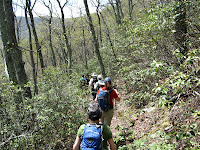 John Shannon provided walkie-talkies for communication with Erick Clepper returning from injury and running sweep with Dan Ralston. We also were pleased to have Debra Fisher, Dan Funkhouser, Helen Reutlinger and Eric Seaborg back hiking with us again. Our first in command this day were Jeff and Will Monroe who led us through the woodland beauty of Doubletop Mountain along the Wilhite Wagon Trail, which PATC maps indicate is not maintained. However, we found it a lovely and not too steep trail, complete with stone retaining walls from many years past. 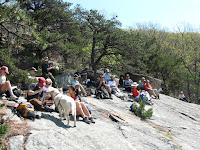 Wildflowers were just begining to show and views were still accessible while the leaves are still growing in size. Our break was along the Doubletop Mountain trail on the most enormous lunch rock I have seen in the Virginia mountains. It was easily able to accomodate our vast group, so we admired the view across the Rapidan River toward Bear Church Rock. 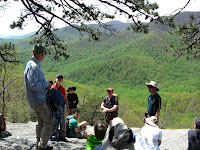 Goodies were shared after lunch in preparation for the optional spur trail that took us to another impressive rock close to where the Doubletop Mountain Trail begins its descent, prompting hike leader Iva Gillet to recount the harrowing night she and 6 friends attempted to negotiate this trail with horses in the dark, eventually having to spend the night on the trail. Most all agreed they did not want to go on a trail ride with her. 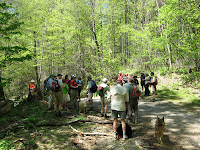 Leon Gorman and Baily waited patiently for the return from the spur trail as we prepared for our descent. OASC members Beth Goodell, Alex Popkin, Steve Cohen, and Yao Lu led us down the trail, which provided glimpses of trillium, wild geranium, and other lovely early flowers. Barb Wilson, Liz Lyons, Marit Gay, Brad Young, and Rita Kieffer chatted as we meandered through the wooded trail toward the Rapidan River. Bev and Pete Fink, Eileen Seaman, Neil McKinney, and Lindsay Brown appreciated the lovely flowing waters of the river as we arrived at the Rapidan Fire Road to head back to the cars. Ken and Marie Moss charged ahead with visions of a post hike brew in their minds. Many were surprised that Marian Styles and John Brandt did not take a cooling dip in the water, but the perfect temperature must have made this seem unnecessary. New hikers Steve and Nancy seemed to enjoy this hike which ended up at 8.5 miles, after adding the out and back spur trail. During the hike Andy Wilgruber photographed the spring glory. Not sure how many photos we took of the wedding party that was posing on the banks of the river as our vigorous group hiked past, admiring the tuxedo-in-the-woods look. After briefly counting to make sure all had returned, many of us headed to the Tastee Freeze in Madison for some much deserved ice cream treats. 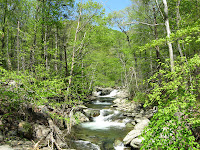