In the middle of a brutal heatwave, the Charlottesville Chapter met up with members of Lynchburg's Natural Bridge Appalachian Trail Club to complete a 10 mile loop hike in Shenandoah National Park on Sunday, July 21, 2019.

Charlottesville hikers included PATC members Nancy Handley, Karen and John Ballen, Claire Cline, and Michael Seth, along with hikers Patrick Cory, Lin Yang, and David Consolvo.  A group of 6 hikers came up from the Lynchburg area to also hike with us.

Although the temperature in Charlottesville hit 100 degrees, lower temps and an occasional breeze made the hike along the Blue Ridge crest a surprisingly pleasant one for the most part.  The group hiked from Jarman Gap northbound on the A.T. to Turk Mountain, where they ate lunch and dried out from a sweaty climb.  The Turk Mountain trail was a little more exciting because of reports from other hikers of a large wasp nest near the trail.  Several folks had been stung, but none of our hikers experienced problems.

After lunch, the group continued north on the A.T. past Turk Gap to look at a large tree that the PATC had cut up this past winter, after it blocked the trail.  The group then turned around and descended on the Turk Run Trail to the Moorman's River Road, which they then climbed back to their cars for a 10.6 mile loop.

You may have figured out that Three Chopt, and Three Notched Road and U.S. 250 are all one and the same – the original road from the Virginia coast through Richmond and Charlottesville to the mountains – marked with three basic slashes on the trees for colonials to follow, but did you know anything about the white slashes on the Appalachian Trail?
The estimated 60+ guests at the annual summer meeting of the Charlottesville Chapter of the Potomac Appalachian Trail Club found out some of that history when PATC past president and club historian Tom Johnson took the microphone.

June 30, 2019, was a warm night at the PATC Dunlodge Cabin in Charlottesville, but though the potluck table was spread inside, the main event with Johnson as guest speaker, took place out of doors—naturally.

The white blazes along the AT were only part of the history Johnson keeps at the ready for presentations, and his audience was treated to a song, a quiz about the earliest trail founders, and a bit of the history of the various early hikers in the Appalachians.

“In early 1930s the early chapters all used different colors, and it was Myron Avery who convinced all of them to begin using white,” said Johnson, later explaining that Avery liked the white blazes that he saw the Green Mountain hikers using in Vermont.
Johnson told the group that Egbert Walker, the club’s first mapmaker, is believed to be the first to buy a 1 1/2-inch Red Devil scraper from a hardware store, used to scrape the outer layer of bark off trees chosen for blazing. Color was not the only thing Walker wanted in blaze consistency; he also encouraged early trail makers like Frank Schairer to stop hacking deep into the trees’ cambian layer. An ecologist for the Smithsonian, Walker’s concern was that the divot made by axes was damaging the trees. “Avery’s standard 2 x 6-inch wide scrape was all that was necessary to make a blaze, and being shallower, wouldn’t hinder the tree’s future growth,” explained Johnson. “Walker addressed the ATC Conference at Skyland in 1935 recommending the scraper as opposed to the axe chop,” Johnson concluded.

After Johnson, Charlottesville Chapter President Jeff Monroe had the floor and reported that the active Charlottesville group stepped out for 30 separate hikes, with 100 different hikers, covering more than 2,000 total hiker miles. The chapter joined forces with other groups, too, sometimes, including the Southern Shenandoah Valley Chapter (SSVC); the Roanoke Appalachian Trail Club, the Natural Bridge Appalachian Trail Club, and a work hike with some Get Hiking! Charlottesville members.
Before relinquishing the mic, Monroe also congratulated the chapter’s top hikers – Nancy Handley, leading the way with 15 hikes and 116 miles to her credit so far in 2019, and Marian Styles, not far behind, participating in 14 hikes for 97 miles.  John Brandt was third with 11 hikes and 82 miles logged. Several chapter members spoke to the crowd about the importance of maintaining the trails, pointing to Tom Johnson’s T-shirt for the occasion, emblazoned with the slogan that “Trails don’t blaze themselves.”

The Charlottesville chapter members will meet next at Dunlodge in December for a winter holiday potluck and more off-trail frivolity. 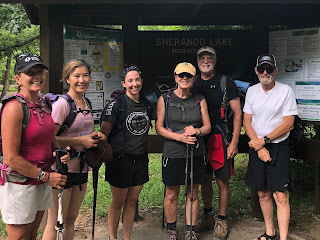 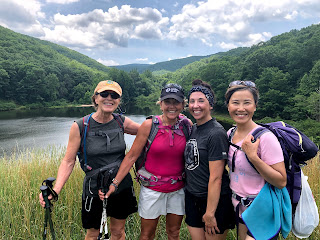 While it was hot in the valley, it was actually quite pleasant in the Blue Ridge Mountains with sunny skies and a strong breeze.  Marit Anderson led the hike with Mark Perschel at sweep.  Eight hikers signed up, but we had a few cancellations, so the group of six also included Nancy Handley, Tony Alimenti, Suzie Cobleigh, and Lin Yang. We parked at White Rocks Gap and began with the White Rock Falls Trail and taking the side trail to see the falls....quite nice! We continued across the Blue Ridge Parkway to Slacks Trail with a stop at the picnic table to enjoy chocolate chip cookies and to water up.  Then down Torry Ridge Trail to Sherando Lake with viewing along the Lake Trail admiring the kayakers.  We had a long, delicious lunch at the beach with the entire group taking a swim.  After we were cooled off and were refreshed we tackled the uphill climb back up to the Parkway via the White Rocks Gap Trail, which meanders along the North Fork Back Creek.  During the day we saw salamanders, a few wildflowers (tickseed and sneezeweed mostly), geese on the lake, deer, and chipmunks. The group was quite fit, ending the day with 1700 ft elevation, 10.6 miles of hiking, and arriving at the parking lot at 3 pm enabling quite a few of the participants to get to the PATC Picnic beginning at 5 pm. I hope  everyone had as much fun as the hike leader! 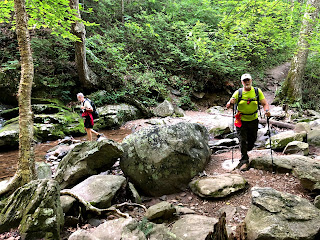 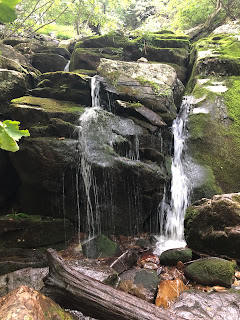 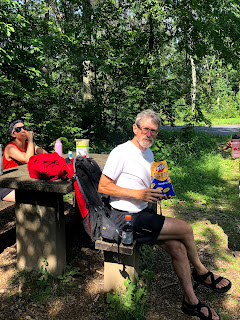 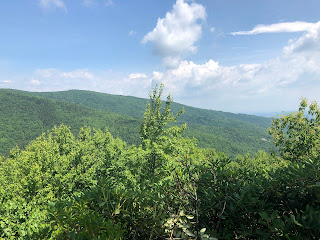 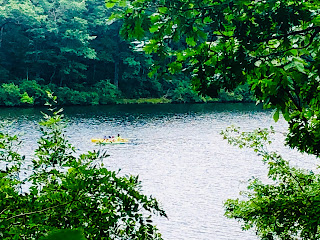 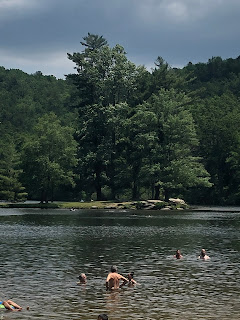 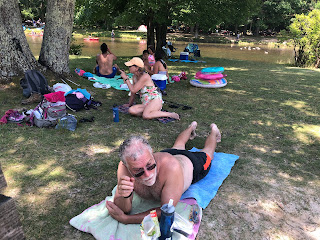 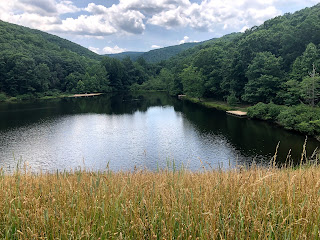 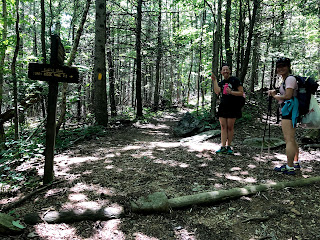 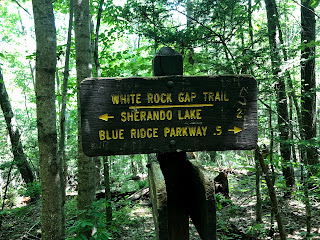